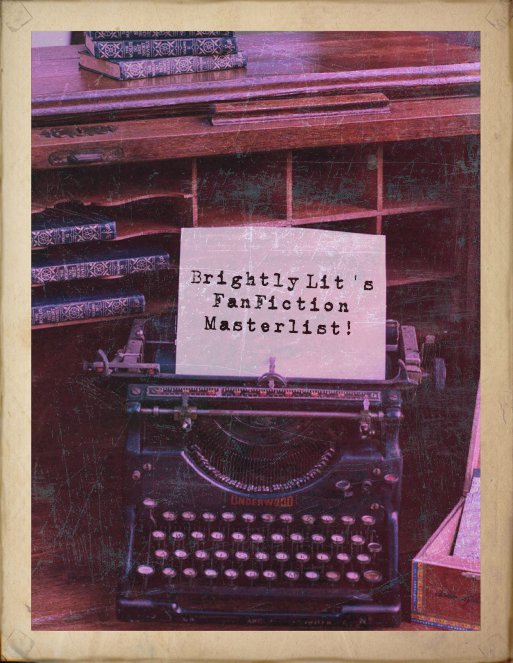 Gorgeous masterlist banner by the amazing

The vast majority of my fic is gen, but I have a few entries in other categories: a novel-length Dean/Cas series, a het fic, and a few SPN crossover fics. I don't write anything more graphic than R, and virtually all my gen fics are PG or PG-13. I hope you find something you will enjoy! I've grouped my gen fics in such a way that it will hopefully be easier to find something you'd like to read ....

( Collapse )
I haven't seen the last two episodes of SPN because, well ... it's so depressing when it's a bad one, and that's been happening all too often lately. Recently, we watched an episode we knew we probably weren't going to like because y'all had nothing good to say about it (sure enough, it sucked) and followed it up instantly with the next one that was good, and that definitely helped the bad one go down better, but I'm not sure I'm going to like either of the last two episodes, so I'm kind of dreading seeing them, honestly. SHOW, COME ON, YOU CAN DO BETTER. After a strong start, I'm finding this season pretty disappointing. Am I the only one?

I just finished all the episodes that have been released so far of what has become one of my favorite animes of all time, Natsume's Book of Friends.

It's about a teenage boy who's been able to see spirits all his life called youkai, which is a Japanese kind of unseen monster, like a nature demon. They don't interact with humans all that much, who can't see them, but Natsume can. Some are friendly, some are terrible, nearly all are extremely selfish (very like the demons on SPN).

When he was younger, he didn't understand what they were or what was going on (in this way, it's got some things in common with the movie The Sixth Sense). He was always strongly reacting to things that terrified him, but since no one else could see them, he was accused of lying and trying to be strange and scare people. Orphaned at a young age, he was passed around from relative to relative, none of whom wanted him or could handle him, some of whom treated him badly.

However, when the show starts, he's living with some distant relatives who did want him and are kind, in a peaceful rural town. He's still flinchy and formal with these folks, after having been cast out so many times. He still has encounters with youkai, some of which are damaging and dangerous, and he might come home covered with leaves or dirt or scrapes, or be out all night or what-have-you, but they're patient and understanding, although they don't know about his special ability to see things.

He's also managed to make some friends at his high school. He's gotten much better at hiding it when he gets freaked out, but sometimes he still inevitably acts weird, and his friends are also nice and tolerant and understanding. Some of them even learn his secret.

The show has a marvellously consistent aesthetic and atmosphere: gentle, melancholy, beautiful, poignant. Rare is the episode that doesn't bring a tear or two to your eye by the end. The theme is generally about finding love and acceptance after being without it all one's life, how precious he finds his family and friends--both human and youkai, for he puts a lot of effort into helping youkai, who then in some cases feel compelled to return the favor, and love him in their strange way.

The "Book of Friends" is a book left him by his grandmother who could also see youkai, who challenged them to a fight or a game and, if they lost, took their name and wrote it in the book, which made them have to serve her, if called, so youkai are constantly coming to Natsume to demand their names back, and he does his best to give as many as he can.

He also has a youkai helper and protector who usually takes the form of a doll-like cat, whom they kind of jokingly call Nyanko-sensei (which translates basically as "Master Kitty-Cat"). He claims he's only there to protect him until he eats him (youkai like to threaten to eat humans, as well as smaller youkai) and takes the book for himself, making all the youkai in it his servants, but Nyanko-sensei also loves him after his fashion, despite his hard-partying ways. (... Yeah.)

We just finished watching the fifth season, and it's already been greenlighted for a sixth. It's kind of a slow-burning show to have become so popular, but it is kind of popular now--yay! I really can't recommend it enough if any of this sounds like your cup of tea.

I admit to being disappointed in the fifth season, though. The OVA was so boring it was hard to get through. Meanwhile, though throughout the series most of the episodes focus on Natsume and his friends and his adventures with youkai, every season there's been an episode or two that's money, a feels bonanza, doing a flashback to Natsume's difficult youth, or someone new learning his secret, or an outside POV, or learning more about his relationship with his new parent figures.

I expected the episode named after these parent figures to be such an episode (the penultimate episode of the fifth season), as it was to be all about how they decided to take him in. Instead, they filled the time allotted for the episode with the mother figure fretting about shopping and cooking, never revealing anything particular that wasn't already known, and not developing the parent characters at all; it was a big disappointment.

Then the final episode of the season was about the "mid-level youkai," as if we were all just dying to learn more about them, and how they found some flowers they thought Natsume would like. (!) As much as I love this show, I had to turn to my friends and say, "I think they've run out of ideas," and they had to reluctantly agree, so keep that in mind as you embark on the series, if you decide to.

Still, what's already been made of the show is fantastic (except for, as mentioned, a rather weak fifth season), and I highly recommend it.

I dreamt I accidentally farted on Obama.

So ... how are people feeling about this whole lj-servers-moving-to-Russia thing? I saw on the home page a lot of people were afraid lj would abruptly shut down without warning. Just in case that does happen, I made a dreamwidth account--brightly_lit, same as here--where I'd love to hook up again with you ladies if you make the switch, as well.

I started with lj (under a different name) way back in its heyday in the early part of the millenium. I remember reading in the TOS that your posts and comments would be saved on lj's servers "forever," and I thought, "How cool, to have this thing for posterity when that's so rare. I wonder how they can promise that? But oh well, I guess they wouldn't say it if it wasn't true." Then they sold the company, again and again, and of course it ended up being just words, another tome created and ultimately perhaps lost to time, but if this is the end, it sure was great while it lasted. And I think dreamwidth has a lot of potential (even if for some reason it seems to lack much interaction between users).

I guess personally I think it seems unlikely they'll shut us down without warning, but it seems likely that lj might change a lot, maybe not for the better. Better to be safe than sorry in terms of coming up with a backup plan, in any case, is my opinion. Also, apparently it's quite easy to transfer your whole lj to dreamwidth if you're so inclined. I'd love to hear everyone's thoughts on the whole business. I saw it discussed at length on the home page, but I don't think a single person on my friends page mentioned it, so it sounds like none of my friends here, at least are worried, so that's good.

Lookity lookit! RWBY is one of the shows I'm currently watching at movie night! (That's what Zachary's, er ... onesie says, and Rooster Teeth is the production company.) I highly recommend the show--the music is fantastic and it's populated almost entirely by badass female characters. Interesting animation style, as well. Awesome that Jared did this! ... but why isn't Jared wearing a onesie, too?

kate_mct at Jared and Zachary Levi

I've had the good fortune and pleasure of getting to listen to Queen (and singing along with gusto, naturally) while driving lately, as it finally occurred to us to order their best-of 3-CD collection. A friend gave me a tape of the original best-of collection in high school, and we listened to that thing every damn day on the way to and from school. It made everyone in the car happy ... then and now. The 25th anniversary of Freddie Mercury's death just passed. Freddie, thanks for everything you were and everything you gave to us.

What are y'all's Thanksgiving plans?

brightly_lit
Rating: PG
Word Count: 4,200
Characters: Sam, Dean, Mary, [I would like to keep this one a surprise as you read along, but it is here if you want it]Lucifer, original hunter characters
Genre: gen, hurt/comfort, intense angst, some humor, heroism, badassery, family feels, the consequences of growing up without a mother, hunter gathering
Summary: It's a good thing Mary hasn't asked her sons much about what they've been up to while she was dead, because they'd just as soon she didn't know about most of it, especially Sam. Maybe she wouldn't want anything to do with him anymore, if she knew. Unfortunately, it's no longer his choice.

"Sam really didn't want their mom to know Sam had been some kind of freak who had visions and was the devil's chosen vessel, that they'd both spent a great deal of time in hell .... Looking back, there was very little to go on the list of 'things you want to tell your long-lost mother about.'"


I LOVE S12. I've often felt inspired to write fic, watching this season, but never so much as watching 12.6, which included or hinted at things I've always wanted to see in canon: mainly, for Sam and Dean to finally get some of their due from other hunters for all their amazing accomplishments, and for Mary to get to know about them too, so this fic is putting all of that that I wanted to see into a story, plus more. I hope you like!

But as for good SPN-related shows, have y'all seen the first two episodes of Kings of Con yet?? HILARIOUS. I'd love to hear what you thought of them, if you've seen them.
Collapse